1 May saw the conclusion of Auto 2022, the biggest automotive event in the Baltics, which surprised its guests with impressive Baltic premieres and a glimpse of the sustainable electric future, with all of the cars sounding their horns at the same time to mark the end of the event.

119 companies from seven countries—Latvia, Lithuania, Estonia, Poland, Germany, Sweden, and Finland — brought the latest vehicles, electric cars, tuning masterpieces, sports cars, car maintenance gear, tools, and everything else new and automotive to the show. Throughout its three days, this year’s Auto was visited by 22,564 people, a rise of almost 50% compared to 2021.

Impressive car premieres
This year’s show delighted its guests with a few impressive Baltic premieres! The incredibly powerful and sporty Italian supercar Maserati MC20, also endorsed by the footballer David Beckham, earned the most excitement among them.
French carmakers also prepared a notable number of enjoyable Baltic debuts, with the Citro?n C5 X, Citro?n C5 Aircross, Citro?n ?-Berlingo, and Citro?n Ami. The Baltic premieres of the Enyaq Coupé iV and Fabia Monte Carlo took place at the exhibitions of ŠKODA Latvija. The electric cross-country crossover coupe Nissan Ariya, Renault Megane E-Tech, and the new-generation Jeep Grand Cherokee, which had arrived directly from the USA, also made their Baltic debuts in Ķīpsala.
German brands brought the coupe SUV Volkswagen Taigo, and the VW Multivan. The van’s latest generation is also available as a hybrid. The new Dacia Jogger and the updated Audi A8 also enjoyed their Latvian premieres.

Latest electric models
The electric future is inevitable, as confirmed by exhibits of Auto 2022. Mercedes-EQ electric cars came to the show for their first appearance in Latvia. The Mercedes-EQ exhibition presented the latest electrical intelligence successes of the automotive industry, with Mercedes-EQS, Mercedes-EQA, Mercedes-EQB, and Mercedes-EQE. ‘By 2025, electric cars will already account for 15–25% of the total sales of Mercedes-Benz AG,’ emphasised Jānis Dambītis, Mercedes ambassador in Latvia.
Although the biggest premiere of the Citro?n exhibition was the new C5 X—this brand’s smallest electric car—the Ami, one of the cheapest electric cars on the European market, attracted the most attention! The Eleport exhibit featured a new version of the Ford Mustang, Mach-E, a 100% electric crossover version of the legendary American muscle car. Škoda’s latest electric vehicle, the Enyaq Coupé iV, which in its sporty RS version is the most expensive mass-produced model of this Czech manufacturer, also saw its Baltic debut at the show.
Using an electric car does not always mean that you have to connect to a power socket to replenish energy reserves. There are electric cars in which electricity is generated from hydrogen! One of these is the new Hyundai Nexo, which also debuted at the show in Latvia.

Guests of the show not only learnt about the new cars from dealer representatives, but also got to ask car expert and journalist Normunds Avotiņš interesting questions.

Recent events in Latvian motorsport
The Latvian Automobile Federation (LAF) offered a chance to find out about motorsport in Latvia at the show: its guests could watch demonstrations and meet Latvia’s prominent motorsport drivers: Mārtiņš Sesks, Jānis Baumanis, Nikolass Bertāns, Ervins Grencis, Ronalds Baldiņš, Edgars Kroģeris, and Daniels Lācis. Drift, rallycross, autocross, and rally cars, as well as trophy raid and off-road vehicles could be seen in the LAF expositions.

All you need for car maintenance
Well-known companies such as Eleport, Ehrle, Auto Palete, Animo, Kurbads, Rags, Signeda, and others presented what today’s industry has to offer in the Auto Mechanics section of the show. Guests of Auto 2022 learnt about car care products, anti-rust treatments, equipment and machinery for car retail, car washes, workshops, and electric charging stations.
The show offered a glimpse of various comfortable vans and campers intended for travel; there were also quad bikes and electric scooters.

Auto tuning show
A jet turbine in the back, and an electric-powered glass dome roof: that’s exactly what the bright green Saab or ‘Wasaabi’ is like, and it was one the most discussed exhibits at this year’s Auto Exotica. The auto tuning show in Ķīpsala brought together some the most powerful tuning projects, fast racing cars, and restored classic vehicles! With an unprecedented presentation of 12 cars, the show featured the popular youth movement CC Nation. Guests could also see the BMW Individual of the movement’s leader. For three days, fans of ‘youngtimer’ vehicles which have gained prominence in recent years, especially those from the 70’s and 80’s, as well as Soviet car enthusiasts, who presented the evolution of all the most popular models of the Zaporizhzhia car factory in Ķīpsala. Meanwhile, at the WhatCar.lv exhibit, lovers of classic cars got to see the restored 50-year-old Jaguar Mark VIII four-door, as well as the sporty Porsche 911 GT3 and Toyota GR Yaris.

Auto Exotica Awards 2022
Winners of the Auto Exotica Awards 2022 competition were determined and awarded at the show. The title of Car of the Event was awarded to the powerful and sporty Italian supercar Maserati MC20 (Luxury Motors Latvia). This time, two vehicles got the title of Best Show Car: the bright green Saab Wasaabi, and Kryptonite. Dodge Challenger (Signeda Latvia) brought the most muscle to the table, earning the title The Muscle Car. Sound Pit won the Best Car Audio title, while the Best Friend of Auto Exotica went to the Kristena Drift Team. Edgars Kroģeris’ BMW F22 on the LAF display was named the Best Drift Car, while the Nissan GT-R at the Kesel Motorsport exhibit was found as the Best Japan Tuning Car. CC Nation received the Best Stance Tuning Car Cup for their BMW E39 M5. 3B Motorsports got the award for the best drift presentation at the show, where guests could see the drift vehicles of motorists Reinis Ozoliņš and Toms Jankovskis: Nissan 200sx S13 with a 2JZ engine and 750 horsepower, and BMW E82 with an atmospheric Mercedes V12 engine. The Most Unique Restored Car cup went to RetCar for its ZIM, while the Latvian Antique Car Club got the Ukrainian Car Industry Heritage award.

Something for the entire family!
At the show, children and adults got a chance to drive ActivePark drift karts, and watch professional bicycle and motorcycle shows by Greentrials, the best extreme cycling show team in the Baltics.

The Auto 2022 show was organised by the International Exhibition Company BT 1, and sponsored by the brake equipment manufacturer Textar. 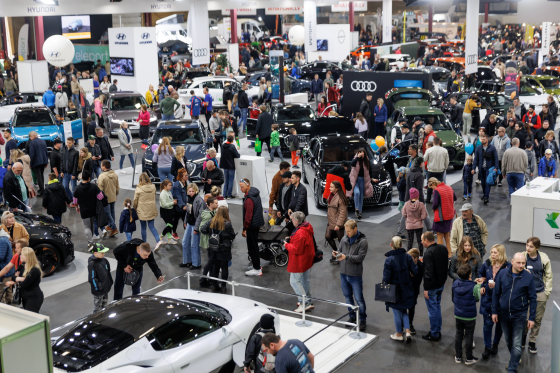 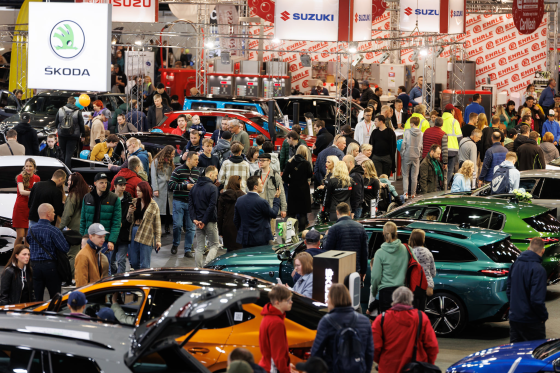 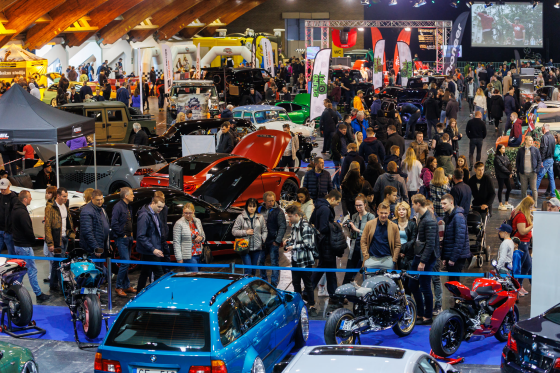 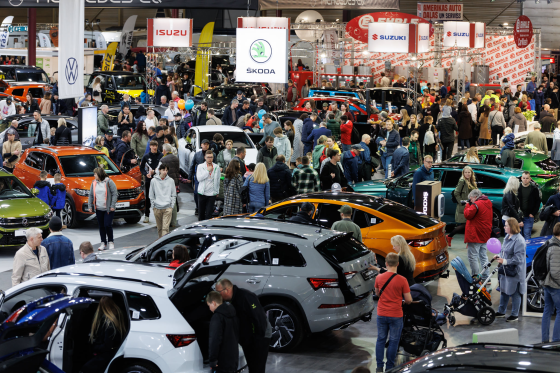 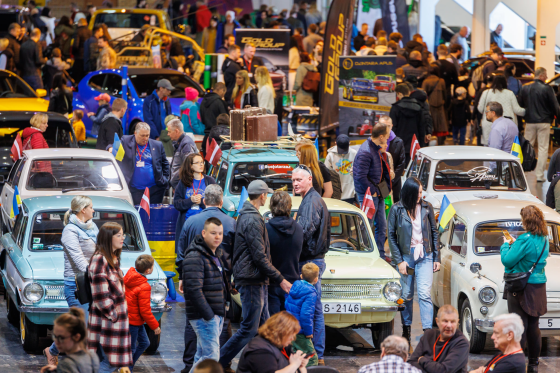 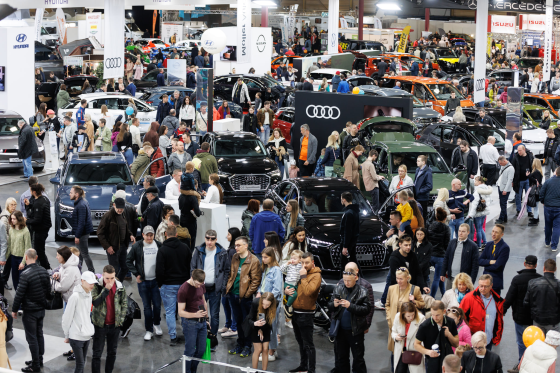 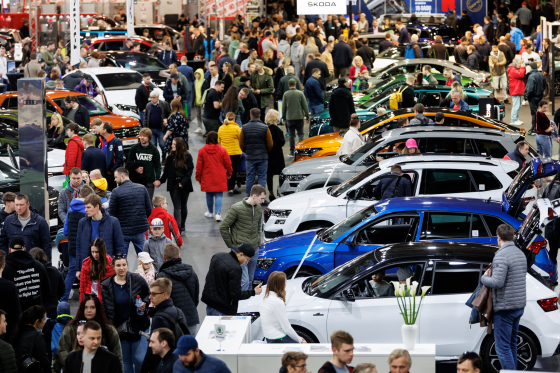 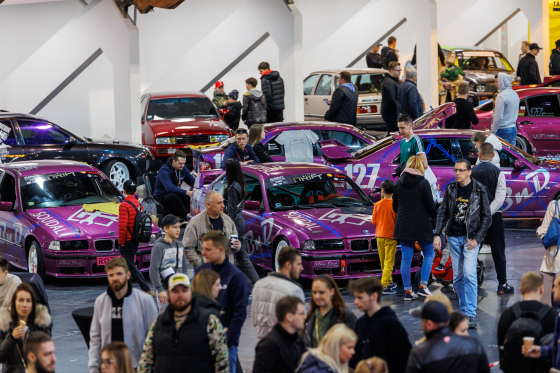